This beautiful and inviting public realm has acted as a catalyst for renewal of this neighbourhood in Barrow-in-Furness. The inspirational scheme won the award for Best Commercial Landscape Design at the Northern Design Awards in 2017 as well as winning the Adding Value Through Landscape award at the Landscape Institute Awards 2018 and it’s easy to see why. 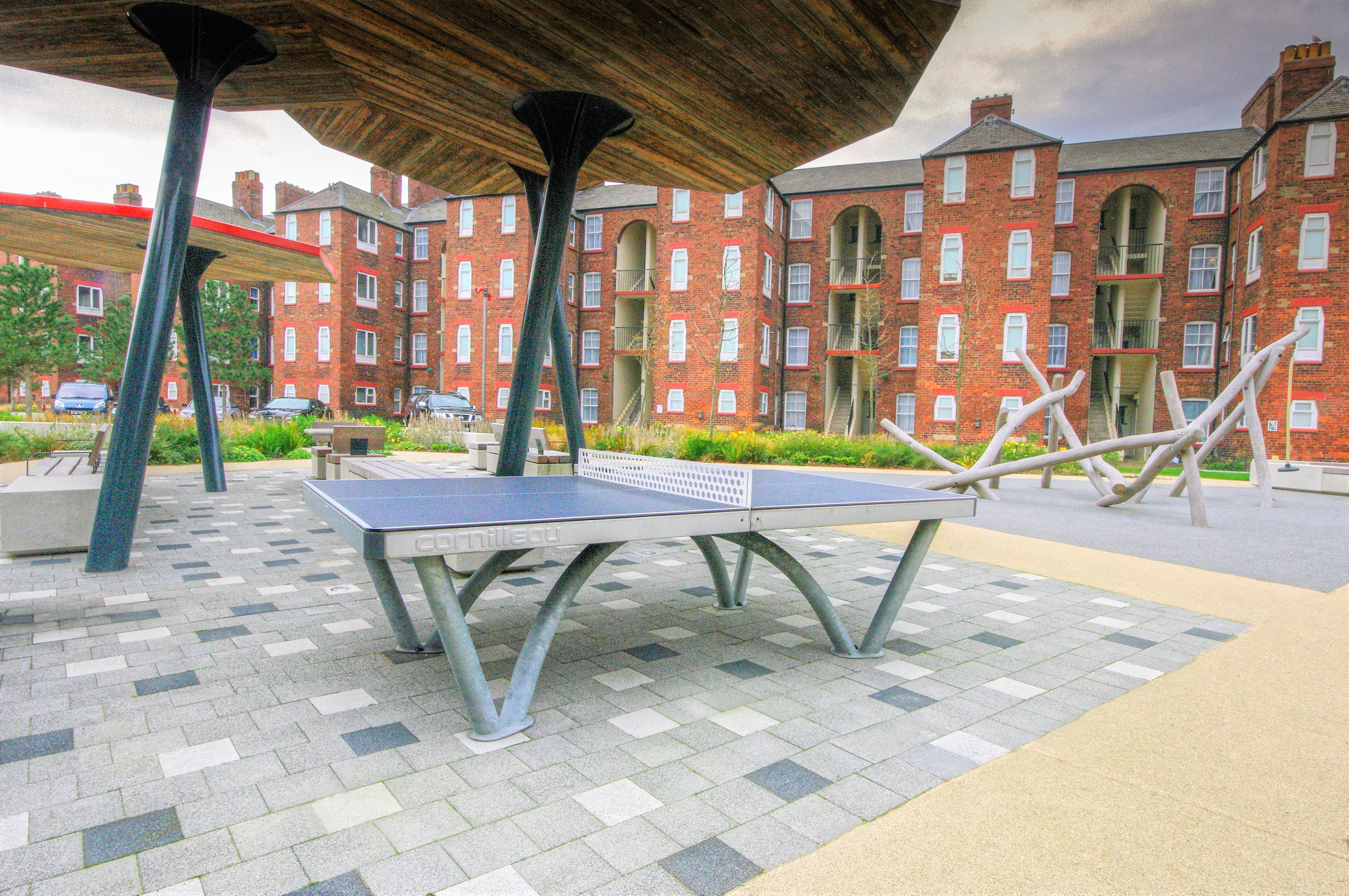 A rich history in decline

Barrow has a rich industrial heritage and is home to British multi-national defence company BAE systems. However, the decline in traditional industry has resulted in hardship. This was starkly reflected in Maritime Streets’ desolate and degraded landscape, where many of the flats were lying empty. Nevertheless, amongst the near dereliction, lay a great opportunity which was recognised by Barrow Borough Council. An opportunity to regenerate the neighbourhood by bettering living standards and increasing occupancy. The brief for Barrow

In 2013, Barrow Borough Council lodged a brief with the Landscape Institute for a competition to improve the public areas in and around the flats on Barrow Island.

Farrer Huxley and James Smith – of mental health charity Growing Well – were selected as the team to lead the project after £1.5m was secured from the government’s Clusters of Empty Homes Programme. The council’s vision was evident from the off – to improve the public realm in the area in order to reinvigorate the neighbourhood and ultimately to attract people to live in the area once again. 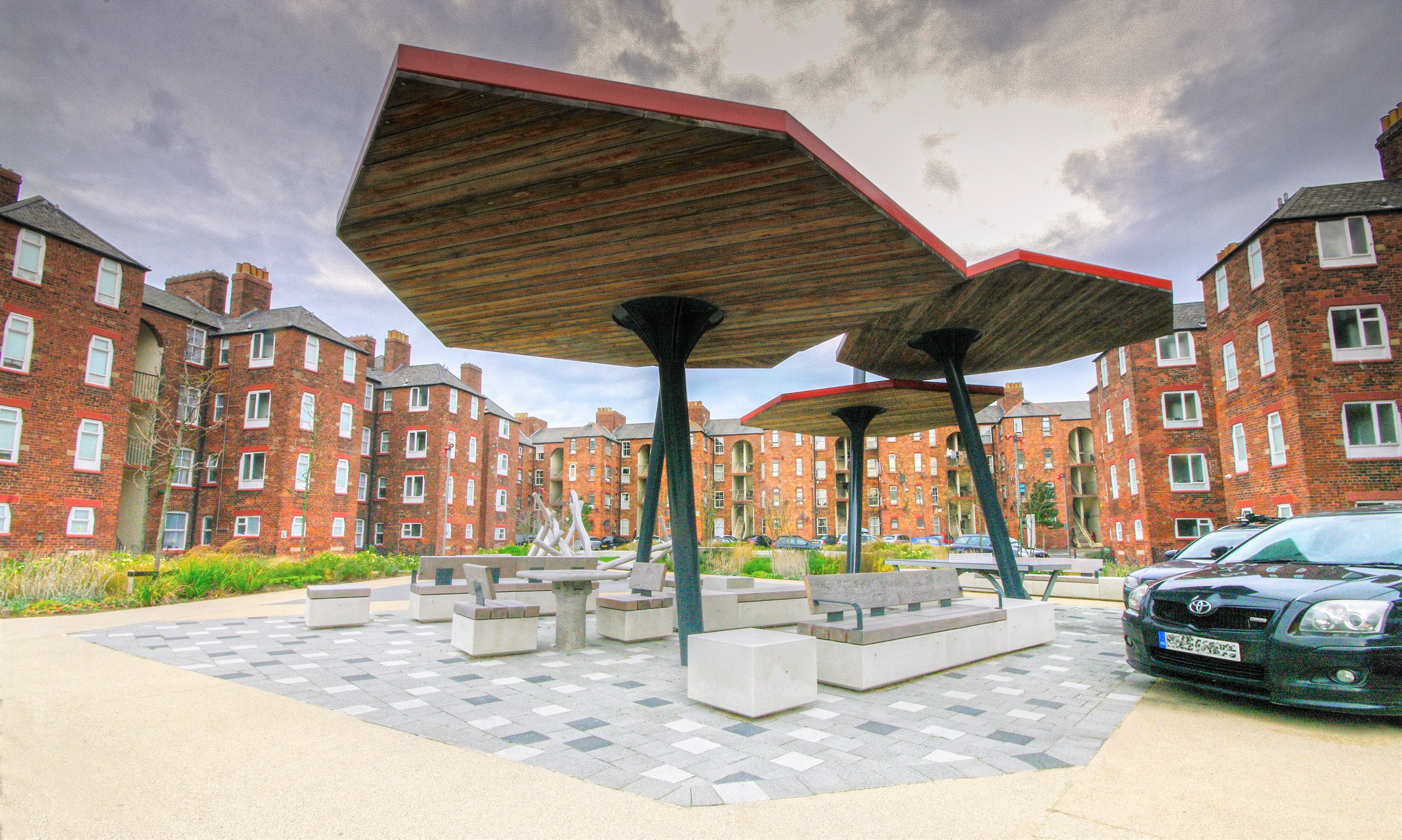 Regenerate and re-socialise through design

Improvements were needed across the whole neighbourhood, but resources were deliberately targeted only at the most visible and utilised spaces. The connecting pathways form the basis of the design, focusing on re-creating social links. Residential blocks are visually stitched together, creating a sense of community cohesion. Providing a social landscape for all was central to the design thinking. A space that is used and enjoyed becomes a welcoming place for all, allowing more vulnerable groups, such as children and the elderly to engage with nature and their community. Pathways inspired by the ship masts and nets of Barrow’s maritime past traverse the central square, connecting residential blocks both visually and physically. The intersection of paths defines spaces for socialising and play, and offers different routes for walking to work or simply enjoying the landscape’s biodiversity. Farrer Huxley strive to be sustainable and therefore were looking to specify materials from as close to the site as possible, as well as products that would give pockets of space within the central square a distinctive tonal variation. Working with contractors Ground Control, Hardscape were able to successfully deliver the materials that met the specification. The design aspiration was for these spaces to stand unique from the rest of the scheme. The distinctive tonal variation of the Kellen materials supplied allowed this to be achieved. The hard landscape consisted of a 3 colour mix of Lavaro Grijs (grey), Zwart (black) and Wit (white). The black and white blocks were intermittently dotted amongst the sea of grey to create boldness. This arrangement of block work is practical and robust, allowing a sheltered area to be used extensively whilst standing the test of time. The tenement blocks of Maritime Streets had an architectural intrigue, but with a degraded landscape, un-occupied buildings, boarded up shops and empty streets their urbanity was unforgiving. The incremental effect of years of neglect was reaching a point of irretrievability. With high levels of deprivation in Barrow, many of the groups the team engaged with were hard to reach. Farrer Huxley and Growing Well became a voice for the community. During consultation, they promoted the importance of resident engagement, to generate a sense of pride and ownership that would also safeguard the condition of the landscape. Materials across the landscape were selected for their quality, replacing the atmosphere of deprivation with one of desirability. A rigorous approach to quality has delivered the physical context and atmosphere of confidence this community needs for its renewal. Hardscape’s materials provided the level of quality the project demanded. The newly named Maritime Apartments are now advertised for short stays, demonstrating the increased desirability of the neighbourhood. Lisa Hart Pearce, Manager of Maritime Apartments has said: “The new landscape has transformed Maritime Streets, not only visually but holistically. People now have a happy, modern, green space to enjoy; full of colour and beauty. There is no doubt in my mind that the wellbeing of the local community has been positively encouraged by the regeneration of the area and I hope it will continue through generations.” 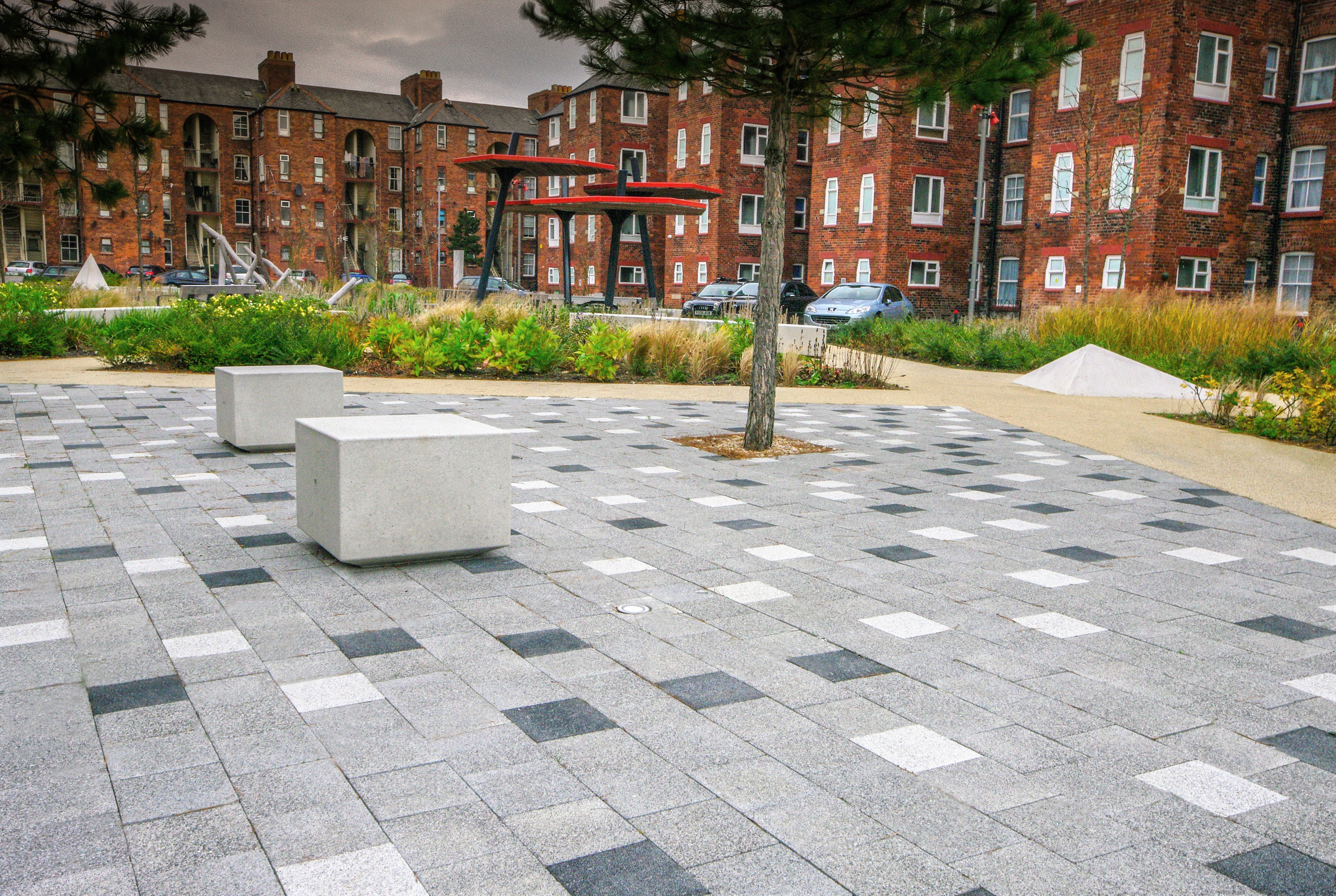 Greater care and enjoyment of the surrounding landscape is a sign of changing values. Trees planted alongside the adjacent Devonshire Buildings has been undertaken by residents. The project has brought 17 times more trees to the landscape and parking spaces have been reduced by 60%. The scheme has also caught the eye of the industry, taking away the award for Best Commercial Landscape Design at the Northern Design Awards 2017 as well as winning the Adding Value Through Landscape award at the Landscape Institute Awards 2018 respectively. The LI judges said: ‘This scheme understands the value of getting high-level professional engagement at an early stage of the project. The process actively engaged the community and encouraged a sense of local pride.’