The IBI Group were commissioned by Wyre Forest District Council to develop a vision for a comprehensive 8,000m2 makeover of Kidderminster Town Centre’s public realm which commenced in October 2015 and completed October 2016.

The brief was for a scheme which would be a catalyst for the regeneration of the pedestrianised shopping core, which in recent years had struggled to keep pace with the adjacent retail development of Weaver’s Wharf. Phase 1 consisted of the creation of 2 public squares and the re-surfacing of the pedestrian retail streets as well as the re-configuration of a key highway route through the town centre. IBI developed themed designs for the street furniture and public art based on the town’s ‘Rock Music’ heritage including stacks of vinyl records and two long benches in the shape of guitar necks. A fitting tribute to the once famous Frank Freeman’s Dance Club where the late DJ John Peel promoted, amongst others, the late Marc Bolan’s 60’s/70’s band T. Rex.

One of the 2 squares, Exchange Place, was designed around the form of the ‘Penny Black’ postage stamp to celebrate Roland Hill, a local philanthropist, who founded the modern postal system and who’s statue stands tall in the centre of the space. Originally a vehicle dominated junction, IBI transformed the space into a pedestrian focussed public square that has redefined the beautiful Grade II listed Town Hall building, which overlooks the space, as the traditional heart of the town centre. The shape of the square was based on the relative dimensions of the stamp and Crystal Black granite was chosen as the main paving material with Royal White granite setts laid in a Bogen fan pattern to pick out some of the stamps detailing.

To maximise the impact these improvements have on the town with the clients’ available budget, a gold, silver and bronze palette of materials was adopted. Using natural stone in the form of the black and white granites and the Tower sandstone as the ‘gold’ standard materials in the main squares and the Kellen Breccia Tagenta range as the ‘silver’ standard for the retail streets and highway route footpaths, we were able to achieve this objective without compromising on quality. 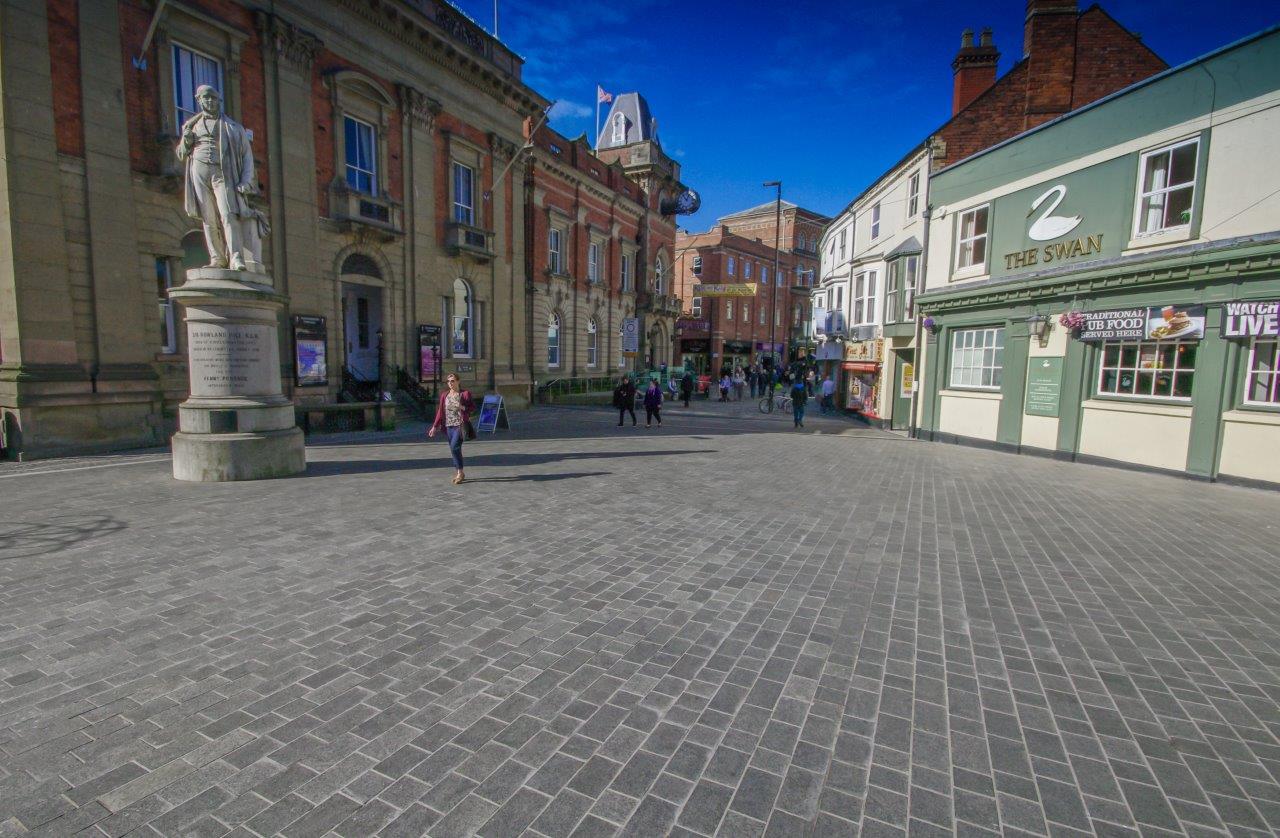 Hardscape worked closely with the client team to help fulfil the brief to the finest detail.  Councillor Tracey Onslow, Wyre Forest District Council cabinet member for planning and economic regeneration, summed things up: “As part of the public realm regeneration development, feedback from residents reflected our aspiration to highlight Kidderminster’s heritage, so this formed part of the brief to the designers. We felt that designing the Penny Black imagery into the new paving was a striking and lasting way of paying tribute to Sir Rowland Hill and his contribution to our postal system.”